Why does the Algerian regime fear Rachad? 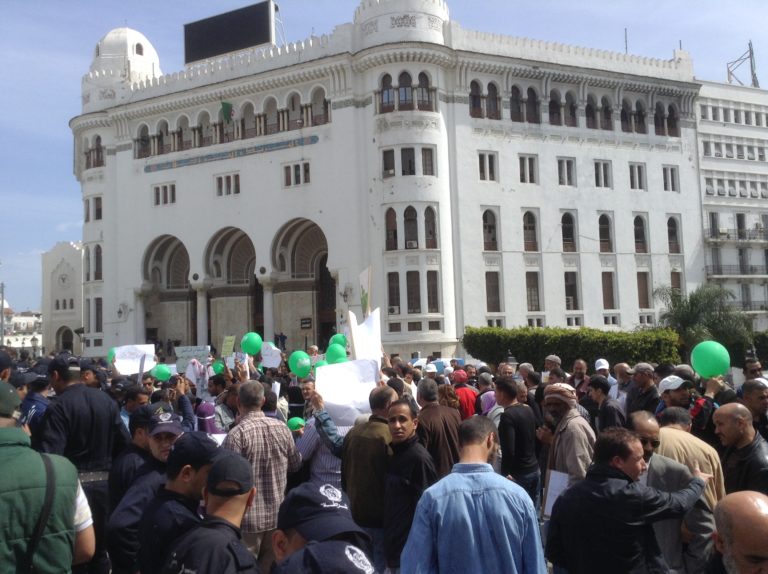 In a recent piece on the detention of Algerian human rights lawyer and opposition figure Rachid Mesli, Robert Fisk asked why Interpol is doing the work of Arab despots. Mesli is the subject of an arrest warrant by the Algerian regime that dates back to 2002. In addition to founding Alkarama (dignity), an organisation that defends human rights in the Arab region, Mesli is co-founder of Rachad, an opposition movement to the Algerian regime.

Considering that just three years ago the Algerian regime unsuccessfully tried to have France extradite Dr. Mourad Dhina, also a co-founder of Rachad, through another Interpol arrest warrant, the question (in addition to Interpol’s role) is whether the Algerian regime fears Rachad’s strategy of change through non-violent means.

Founded in 2007 by a group of activists of different ideological backgrounds, the movement from the outset posed a challenge for the Algerian regime’s intelligence apparatus. After exhausting the counterinsurgency strategy throughout the 1990s decade-long tragedy, the Algerian security services resurrected the divide and rule tactic by playing on ideology and identifying fault lines in society.

On the international front, the regime embraced the Bush administration’s global war on terror and offered its limitless services to western governments in the form of security cooperation and intelligence exchange. The thinking in Algiers then was that while opposition forces in society were systematically silenced by co-optation or repression, the time was ripe to silence opposition voices abroad. This explains the filing of Interpol arrest warrants against Dhina and Mesli, as soon as the Algerian army’s top brass reached a consensus to designate Abdelaziz Bouteflika president 16 years ago. The global fight on terror, together with lucrative economic deals in the hydrocarbons sector for western energy companies was the recipe, the regime thought, to end its troubles with Algerian human rights activists and political opposition figures abroad.

Things did not go as the intelligence apparatus thought they would, however. Rachad presented an unprecedented challenge on a number of levels. The task of the regime’s propaganda apparatus would have been easier if Rachad were affiliated with a single ideological current, but the movement’s founders include Islamists, leftists, and liberals.

Another reason for concern for the regime was Rachad’s commitment to non-violence as a strategy and as the cornerstone of its manifesto since it was founded in London in April 2007, four years before the 2011 Arab uprisings. The Algerian regime’s immediate reaction was to censor the movement’s website in Algeria and launch a vigorous campaign against the movement’s leadership whenever one of them made an appearance in the media.

The propaganda campaigns were carefully designed to effect a total blackout on the movement’s name, while its leaders we routinely charged with treason and conspiracy in the Algerian newspapers. Rachad strived to break the blackout on its activities by launching a modest web channel in 2009, which offered Algerians an alternative public space for debate and pluralism. The channel did not pose a serious challenge to the regime, given its control over internet access. The channel was censored but earned the movement valuable experience that proved useful in the transformed post-2011 media landscape in Algeria.

The Algerian regime did not win on all fronts, however. Its repression steamroller proved helpless in the academic realm. Thanks to its extensive network of academics and researchers, Rachad’s founders and sympathisers had already put in place an academic project aimed at documenting the human rights abuses perpetrated by the Algerian regime in the 1990s. They published a score of academic books and studies on the 1990s conflict. These books have become scholarly references in North African and conflict resolution studies departments at many universities. An Inquiry into the Algerian Massacres is required reading for political science students at Exeter, SOAS, and LSE, to name just a few universities in the UK.

Algiers tried to block the distribution of the books but only succeeded in France under the Edouard Balladur government. Hardly surprising with Charles Pasqua’s policy continued by Jean-Louis Debré, then minister of interior. Unsurprisingly however, this clumsy move by the French at the time brought more publicity to the publications, which were highly praised by major human rights and civil liberties NGOs.

By 2011, when Arab youth took to the streets and deposed despots in a non-violent manner, Rachad felt vindicated in their strategic choice more than a decade earlier of non-violence for political change. Nevertheless, Rachad had still the task of mobilising Algerian society peacefully.

The announcement of the launch of the movement’s satellite TV channel rocked Algiers to the core. Its response was decisive. The Algerian regime weighed in heavily and compelled the satellite uplink company to take Rachad TV off air just half an hour before its planned launch on 11 June 2011. The opposition movement managed to bring its channel back on air four months later, after a legal battle. Thus, Algeria’s first opposition satellite TV channel paved the way for the launch of scores of private TV stations. By 2013, the regime had to abandon its monopoly and allow the creation of private channels in Algeria. Over thirty Algerian TV channels broadcast now thanks to Rachad’s challenge, which started as a very modest web channel in 2009.

The derailment of the political transitions in some Arab Spring countries revived events the Algerian regime strived to conceal. The 2013 coup in Egypt embarrassed the Algerian regime because after twenty years the Algerian military coup of 1992 is all of a sudden on the international stage, with analysts drawing parallels. The Algerian 1992 coup and the bloody conflict that followed prove rich in lessons for Egypt, Libya, and Syria now; hence the relevance of Rachad. Members of Rachad were amongst the main architects of theSat’Egidio political dialogue in Rome in 1995, to end the Algerian conflict. The regime boycotted it and the conflict rolled on for another five years.

Does the Algerian regime fear Rachad? In light of an objective assessment of the record of relations between the regime and the movement (bogus Interpol arrest warrants, online censorship, taken off air, banned books, propaganda, etc.) it would be difficult to answer in the negative.

The movement’s non-violence pedagogy raised the awareness of sizeable segments of the Algerian youth and enabled them to launch peaceful protests that caught the regime off guard. The jobless youth grassroots movement and the anti-shale gas protests in the south are two notable examples that made international headlines for months, and forced the government to introduce some pain-killing measures.

What adds to the regime’s troubles as it sails through a dangerous power struggle for succession, is that Rachad’s message, that any change in Algeria must start with a reform of civil-military relations, is gaining increasing attraction among the youth, professional, and intellectuals, and even the military. In a recent piece on dealing with conflicts and national traumas, Norwegian professor Johan Galtung, an authority in conflict transformation studies, concluded by saying: “the future belongs to whoever has the most compelling vision”. Rachad seems to offer that to disillusioned young Algerians, who are witnessing a country rich in potential held hostage to a regime in its terminal phase.

There are also indications that Rachad’s strategy has caused a split in the ruling elite: many former government members are now openly adopting many of Rachad’s views. Basically, the current regime has three conflicting facets: first, there is Bouteflika’s family and their protégées, who are seeking only to perpetuate their own interests without any vision or ideology. Second, there is a segment of the military that clearly fear for their privileges and more importantly to have to answer for their crimes during the decade-long conflict. Finally, there is a significant reservoir of civil servants, military officers, and businessmen who have had enough with the current corrupt regime and are increasingly attracted to Rachad’s vision. This is a deep concern for the regime.

The Military Coup in Egypt: Challenges of the Transition