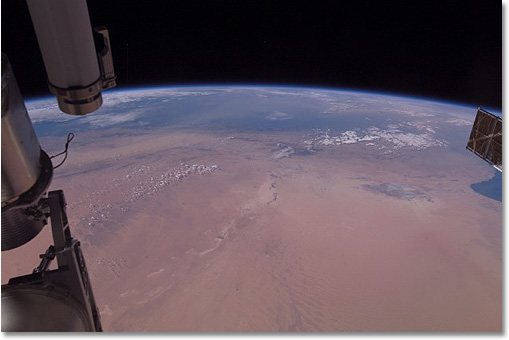 The Grand Erg Occidental A sand dune region of north-central Algeria, the Erg is the large sandy-looking area in the center of the picture. This true desert region receives less than 25 centimeters of rainfall per year. The scale of this high-oblique, northwest-looking photograph does not permit the viewer to see the assortment of sandy landforms within the Grand Erg Occidental-linear dunes, star dunes, complex dunes, compound sheets, and sand streaks. The dark features to the southeast are the northwestern edge of the Tademait Plateau. The small dark specks near the southern edge of the photograph are very small oases and a few isolated circular field patterns (center-pivot irrigated fields). Immediately south of the large sand dunes region are several playas (dry lakebeds) where surface deposits of salt produce a highly reflective surface. The darker landforms near the western side of the photograph are slightly elevated bedrock outcrops whose ridge lines average 610 meters above sea level. Near the horizon, the eastern end of the Atlas Mountains is barely discernible.