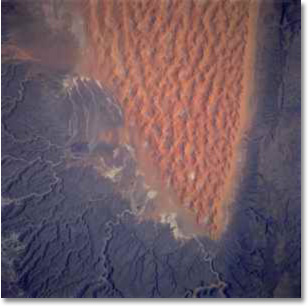 This photograph vividly displays the differences between these two major land forms found in the Tassili N’Ajjer. The complex linear sand dunes that appear orange-colored with star dunes superimposed are the Tiferine Dunes. These dunes got their name from the Tiferine watercourse that flows (when it flows) generally from south to north along the southwestern extent of the dunes. From a space vantage point, this very distinctive alignment of sand dunes provides NASA astronauts a land reference point to identify the area they are viewing in the much larger Sahara Desert. The dark-colored weathered rocks of the plateau that borders the Tiferine Dunes to the east and southwest are primarily sandstone. Many deep, narrow ravines comprise a well-entrenched drainage pattern through the higher elevations of the plateau southwest of the dune field. This erosion process started millions of years ago when the climate of the area was much wetter than it is today. This region now receives less than an inch of rainfall per year.atitude: 26.0 N, longitude: 9.0 E