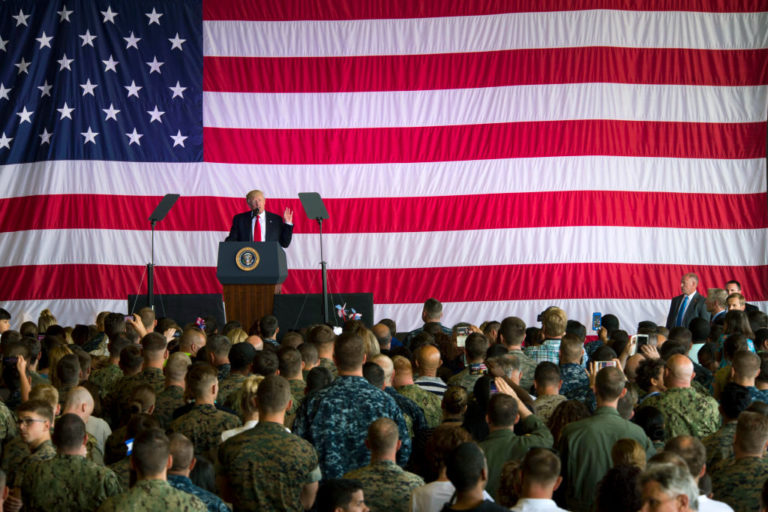 Using excerpts from the Pentagon study made by Nafeez Ahmed, and deeply grateful to him, here are our comments. Based on some work in the field (The Decline and Fall of the US Empire; And Then What?, TRANSCEND University Press, 2010)[i]. Pentagon is a key institution in the USA, next to the White House-Congress-Wall Street. How it sees its own role in the USA and in the world is of primary importance to understand where USA is heading. However, imperialism is multi-headed, military power is only one of its articulations. Also needed for a study of the US empire are economic, political and cultural power.  The title indicates a Pentagon overestimating its own importance.

“The U.S.-backed international order established after World War 2 is “fraying” and may even be “collapsing”, leading the United States to lose its position of “primacy” in world affairs.”

Comment: The key word is “primacy”. It means more than “domination”: the guiding light, the source of ideas and ideals, total leadership. But the “fraying” and “collapsing” started long time ago: in June 1953, not winning the Korean War 1950-53, only an armistice; in April 1975, not winning the Vietnam War, losing. And now not winning any wars against Muslims. But they refer to something beyond winning, to prevailing. “Primacy”.

“The solution proposed to protect U.S. power in this new “post-primacy” environment is, however, more of the same: more surveillance, more propaganda (“strategic manipulation of perceptions”) and more military expansionism.”

Comment: Total inability, to react to new situations in new ways, to see itself not only as effect of outside causes, but also as a cause.

That mental state is “autism”, as opposed to “reciprocity”; “we are each other’s cause and effect”.  According to Piaget, developing from one to the other should have been accomplished by the age of 5.

The spying-propaganda-belligerence approach is honest, however.

“U.S. power is declining, international order is unraveling and the authority of governments everywhere is crumbling.  Having lost its status of “pre-eminence” the U.S. inhabits a dangerous, unpredictable post-primacy world whose defining feature is resistance to authority”.

Comment: This is a key point: “resistance to authority” “everywhere”. There is some truth in it. The ethos of our era is equality-diversity, horizontality-individualism, not inequality-similarity, verticality-collectivism. At the individual level due to the human rights focus on “everybody” and diverse rights?  At the state level due to the end of Cold War bloc submission to superpowers, yielding to multi-polarity?

But the whole statement is wrong. New political parties cut the ideological cake differently, but elected government authority is generally respected. And there is a multipolar international order by and large working, except for Israel and USA “inhabiting” a dangerous, but not unpredictable, “unraveling” world of their own making.

“Danger comes not just from great power rivals like Russia and China portrayed as rapidly growing threats to American interests, but also from the increasing risk of “Arab Spring”-style events. They will erupt not just in the Middle East but all over the world, potentially undermining trust in incumbent governments for the foreseeable future.”

Comment: There is an intellectual breakthrough seeing a world system not only as big and small states but as something inside. Obvious, all 22 Arab states had been colonized and neo-colonized. And there is much more to come from the 35 non-Arab Muslim states, 34 of them colonized (not Iran, only intervened).  Had this been thought some decades ago, they would not have been surprised. They think as badly as they act.

“The report calls for the U.S. government to invest in more surveillance, better propaganda through “strategic manipulation” of public opinion, and “wider and more flexible” U.S. military”.

Comment: Thanks for telling what to expect: the old, more in the open.

As to surveillance: having no arms-weapons and preparing nonviolence helps, but they are against more than that: different ideas, ideals, images.

As to “better propaganda”: do not waste time on US media like CNN–started as a State Department channel–and their many copycats; go for Al Jazeera, Russia Today, CCTV, France 24, NYT, BBC; but with care. And the interminable wealth of facts and insights on YouTube. So far.

As to U.S. military: they only know how to kill, destroy and tend to become stronger being bombed. Have ideas and ideals instead.

And thus it continues, on and on.  We note in passing a nostalgia for Cold War clarity; but no reflection on betraying the agreement, treating USSR-Russia as a beaten enemy.  We notice their inability to see China and North Korea as carriers of ideas–win-win bilateralism, strong self-reliance. They think it may get worse, “the greater Middle East will mutate, metastasize, and manifest differently over time”, “with physical, virtual and psychological violence” (no US structural violence as something they resist). Yes, they will, given this Report, with a distinction between inconvenient, perilous, toxic facts. “The problem is challenging the empire, not its actual behavior”. Toxic.

“Access to “strategic regions, markets and resources”? OK, known as trade. But some of them process their resources themselves and supply their own markets, easily and competitively. Go to war to stop them? Really?

If USA wants to go further down, follow all this stupid advice.

Alternative: do the opposite. Declare the end of the empire and explore cooperation for mutual and equal benefit with all. Make them friends, not military “allies”.  USA: you are so innovative; you have so incredibly much to offer. The world looks forward to a better report.