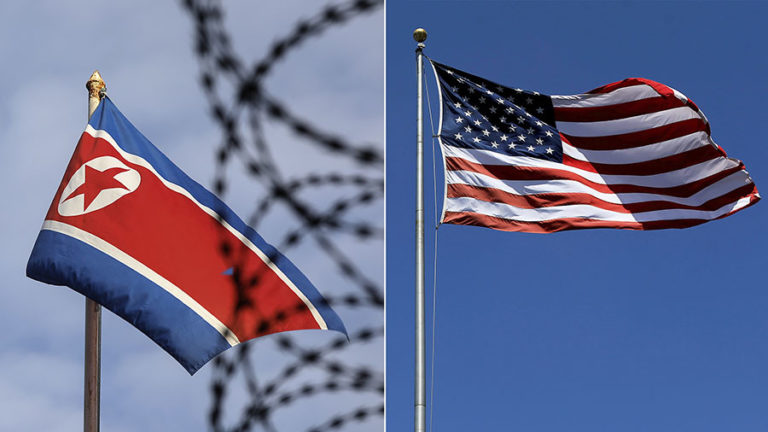 Much is happening.  And not happening.  Thus, there is no war in or over North Korea, with USA or anybody else. And there will not be one.

NKs missiles are credible.  They are fired to show capability to hit US bases in and around Japan; lately this includes Guam and Hawaii. Many missiles have been fired, and they have all landed in the water. Compare that to the high number of US “accidents” of various types.

However, capability is not intent. Neither to hit, nor to target permanently some party, X.  For that, independent proof is needed.

NKs level of invulnerability with the–19.000–caves is credible, to protect the people, and the arms.  Of course there will be still much to destroy, like the last time Pyongyang was carpet-bombed by USA.

NKs strategy of keeping Seoul’s 8 million as hostages is credible.  Invulnerable artillery can eliminate Seoul.  But it will not happen.

China, Russia, South Korea urging de-escalation, in words and in arms display of various kinds, is also credible. NK’s response about Guam should be interpreted as following that advice.  And the USA?

The response is the US-led “Twin Spirit” military exercises off NKs coast, now “more than ever”. Also credible, as proof of following no advice.

USA’s tit for tat, quid pro quo negotiations are unacceptable modes of interstate behavior.  They look suspiciously like equality. USA dictates to other states in no uncertain terms how to behave, and they conform. If not, at their own considerable, also credible, risk.

Trump spends his time mostly on and against US media, drilling himself deeper down into his autism and isolation. Till he is ousted one way or the other, probably by 2/3 in the Senate using amendment 25.

Charlottesville: The place where this author became a mediator in 1960. My point then was to let the segregationists have their private schools; they had sacrificed a lot.  My point today, had I been consulted, would have been to let them have the Robert E. Lee monument; location to be negotiated. Everybody knows who won the civil war.  And in the end overcame Jim Crow Laws with the civil rights movement a century later.

Is it necessary to rub it in?  Better open for some yin-yang, but never on slavery.  There the South was wrong, wrong, wrong.

But was North right about very united USA?  The most belligerent country in world history, surpassing the Roman Empire? A success? Could a less united, even divided land have been less of a catastrophe for so much of the world? Even if the Confederacy did not think that way…

We note the ubiquitous use of ramming vans, trucks, cars into crowds, restaurants, whatever; like planes were used against the Twin Towers and Pentagon on 9/11 (2001).  There are more cars than planes, better distributed. Good reasons for identifying and removing causes.

Syria?  Sounds like CIA–maybe key responsible for 400,000 killed–is now packing up. And it seems the Islamic Caliphate that some Muslims are longing for is gaining the allegiance of imams as carriers of “true Islam”, not diluted by French “enlightenment”. Anyhow, it is all about Mecca-Medina, not Iraq-Syria. Although, in passing, Seymour Hersh’s “Trump’s Red Line” (TMS-Die Welt 25 Jun 2017) is worth contemplating. Some basis for it, but wrongly interpreted.

Enters Czech Foreign Minister (upcoming prime minister?) Lubomir Zaorálek. He argues for a settlement with the Muslim world (The Guardian 15 Jun 2017). To him, Western and Russian colonialisms are the key elements; to be deeply deplored:

“In the Muslim world, in the Russian Caucasus from 1864-67 between 300,000 and 1.5 million either starved to death or were killed; in the 19th century Indonesia, Dutch occupiers killed an estimated 300,000 civilians. Through the Algerian war of the 1950s France had brutalized 1.5 million–half the population; in Libya, an estimated half a million died between 1927 and 1935, partly due to Italian detention camps”.

Again much to learn from Berlusconi’s apology, so far only for the 1911 Italian bombing atrocity. How about the Russians, the Dutch?

Switching to economics: There seems to be a new European system for calculating the GNP, according to El Mundo TV 12 Jun 2017.  Not only is armament included, but also the money that goes into research and development for war. Also included are prostitution and drugs, as “services.”  Anything offered and demanded in return for money is in.

How does that make us feel about economic growth? To be among the “per capita” by which this monster coming out of sickening economistic minds is divided?  Particularly when the alternative is so obvious?

We have two absolutes in the world: ourselves, human beings, and nature [fauna & flora] in and around us, basic for it all. Humans have basic needs, so does nature (diversity and symbiosis).  The purpose of the economy: to meet those needs, not as averages, but at the bottom, lifting it up. As a somatic minimum, by reducing human mortality and morbidity and increasing nature’s diversity and symbiotic capacity.  No words wasted on this in anti-human, anti-nature economistic “growth theory”. Shame!

Theresa May?  She said it herself, “enough is enough”.  Corby may be interesting if he manages to detach the UK from the sinking USA.

Strongly Buddhist, as Russia strongly Orthodox. As the West—what?