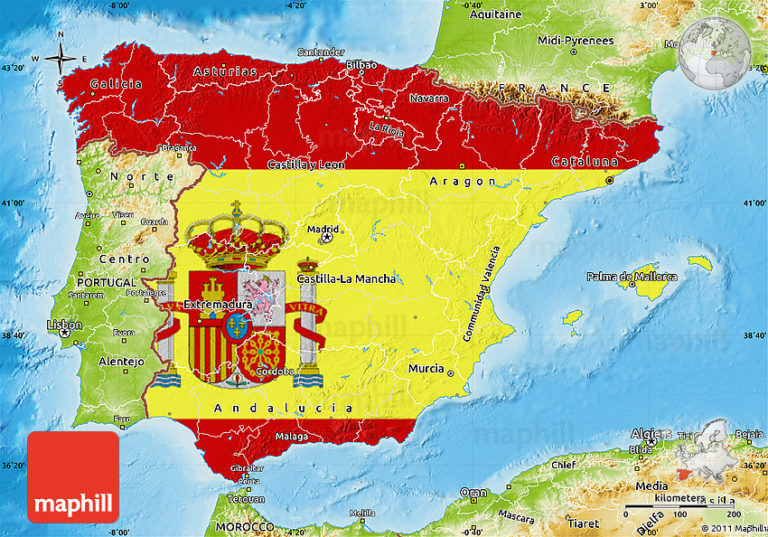 It is customary for Spaniards to add the word “crisis” to the name of the country. They are not alone in that, it may be a Western habit, one of those words driving the West on.

Protected by extended families and 8,000+ local communities–average size only about 5,000, people know each other–Spaniards as people are not in a crisis. And for the poorest of the communities there is always the cooperative Marinaleda model (NYT, 24 Apr 2009) to copy, emulate or adapt. Or new models to be invented.

There is corruption, unemployment, aging by youth leaving the country, increasing inequality; not massive suffering at the bottom.

Even if Spaniards are not in a real crisis, Spain may be.

A more honest, truthful Spain, might be a federation of the six. Spain is not, there will be forces for and against, but with the taming of Basques less violent, more searching for convivencia.

Have a look at “Andalucia”.  The name is from the Vandals of fall of the Roman Empire fame”, but better known as center of the Muslim caliphate 711-1492, in the beginning covering almost all of Spain.

There was co-existence and dialogue among the three Abrahamic faiths till they all became fundamentalist.  Arabic must have been a lingua franca, something like English today. Equally important, people are also what they eat: the cooking was Arab. Paella, saffran rice as Arabian as names of places starting with al. Like ALfaz, fertile land.

Prediction: by 2030 Arabic will again be a lingua franca in that part of Spain, like Basque needing interpretation. One of the tectonic plates moving Spain.  Change; normal in human affairs. But, a crisis?

Depends on how one takes it.  A tremendous enrichment, linking Spain to Arabs, not only to Catholic and Latin communities of nations. Belgium, linked linguistically to the Netherlands, Germany and France, made Brussels a center of Europe.  And Spain?  A center of Eur-Africa.

France penetrated more deeply into Africa, but the other way may matter more. So much Arab-Islam is inside Spain. The Golden Age is embedded in Andalucia in such symbols as a cathedral protruding from a mosque in Córdoba, La Mezquita.  Overpowering, or mosque as fundament?  Neither; in 1984 it was declared by UNESCO part of the world human heritage, owned by humanity, not by the church, Córdoba or Spain.

Reaching out, to, say, 1650 million Muslims and 2000 million Catholics, very many in Ibero-America. A center of Eur-Afri-America.

When on March 11 2004 bombs exploded on four commuter trains in Madrid killing over 190 people Muslims, Moroccans, were suspected. Spain promised to get out of Iraq in six months (actually five). “No evidence of any Middle East-related terrorism since–as opposed to France with much interventionism and much terrorism in the name of Islam (Sam Husseini, The Nation 7 Jun2017).

Or, take the decision in Badalona, city no. 3 in Catalonia, not to celebrate 12 October, “El dia de la Hispanidad–the “discovery” of Latin America by Columbus that evening in 1492. No, a day of genocide! (SpaniaPosten Nov. 2016). A remarkable woman is the mayor. New visions.

Podemos was once a force of real change with countless dialogue circles all over Spain, discussing everything. But they changed from a movement to one political party, among several.  The program may be interesting, but unoriginal on foreign affairs. The lighthouse.

How about the past?  Should not be forgotten, but processed.

Take the inquisition.  Open Valle de los Caídos (“A Valley for all of the fallen”, El País 11 Jun 2011) also for the inquisition victims. Torquemada was worse than Franco. Be honest about the Catholic Church (Ramon T. Sender, Carlos Rex Barcelona: Destino, 1971, pp. 150-57). Fundamentalist not for Father-Son-Holy Spirit-Maria, but Pope-Vatican-Roman church.  A second Roman empire was cast over Spain.

Take the Franco era to restore what to Franco was “normal Spain”, with poderes fácticos, landowners-military-clergy. The Second Republic was too quick, but celebrate their strong anti-war pro-peace position.

Take ETA-GAL: violence for Basque independence and to crush it by killing at least 27 1983-87 (SpaniaPosten Jan, Oct 2016). Use symmetry between them for conciliation and shared rejection of violence.

Take the Palomares “incident” in 1966: a US B-52 with four atomic bombs colliding with a tanker, two bombs bursting on impact scattered plutonium. Revealed by the “Red Duchess” (of Medina Sidonia), pointing to Fukushima (El País 10 Jun 2011). Solution: get rid of nuclear energy and of US bombers and bases. Both will happen, sooner or later. Spain is threatened by nobody, what is needed would be defensive defense.

Take Ceuta-Melilla-Gibraltar. A Hong Kong solution: sovereignty back to the owners, let the rest continue more or less as it was.

Take the bullying in schools, increasing, worse in 2016 than up to 2015 (El País 28 Apr 2017). A marvelous occasion to learn about conflict, violence, conciliation, solution and peace; if the teachers also have learnt, starting by telling the bully “what you have done is unacceptable, but why did you do it?” to get inside the bully’s world for understanding. The SABONA method, developed in schools in Norway.

A reflection: read “Spain” in some encyclopedia. Monopolized by geographers and historians covering point for point in space and time, not about social faultlines, deep conflicts, alternatives. Time has come for encyclopedias to change their orientation and do better jobs.