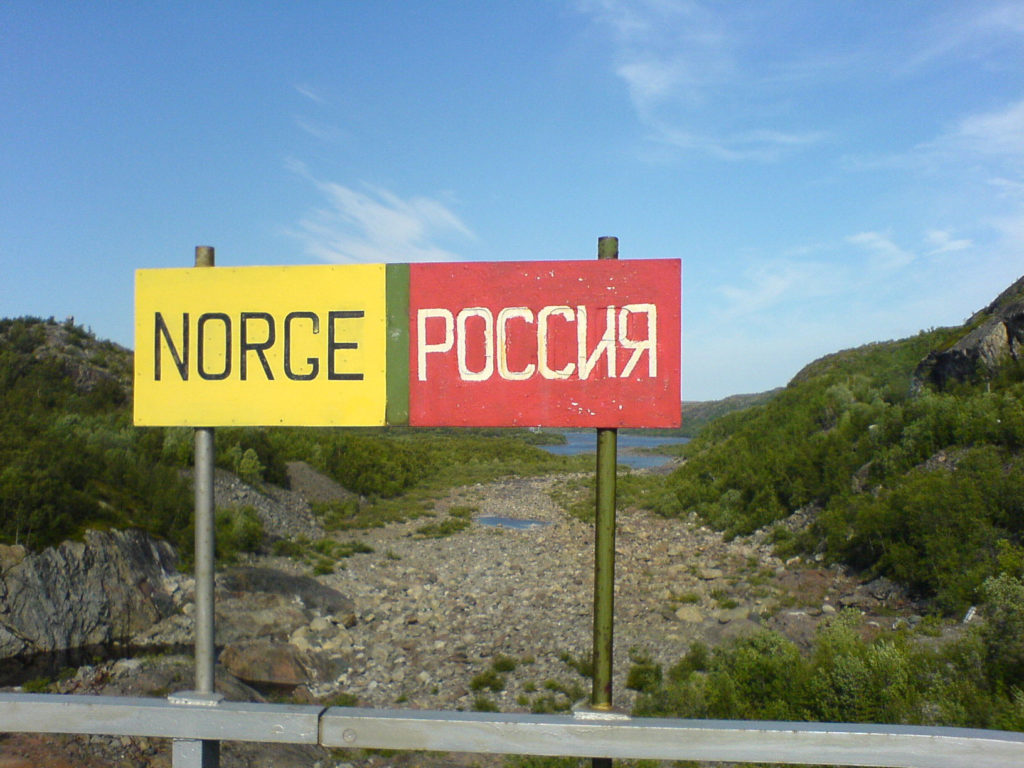 Norway is divided very clearly into three parts: the North and the two parts of the South, the West and the East separated by chains of mountains, plateaus (vidder) and emptiness (there is no town between Notodden in the East and Odda in the West).

And by language, by unmistakable dialects.

In the East “standard Norwegian”, “bokmål” evolving from Danish after 400 years Copenhagen rule, deeply contested in the 19th century.

In the West Old Norse had left more of an impact and the net outcome was called New Norwegian, “nynorsk“, also partly in the North.

But the basic difference is sing-song in West and North, and flatness in East (“flatnorsk“, neither “jeg” for I, nor “eg“, “je“).

Plus, more important in this connection: geographic orientation.

In the high North eastward, Russia, Orthodox-czarist, bolshevik, putinist. One municipality even wanted to join the Soviet Union.

In the lower North and in the West: westward, across the Arctic-Atlantic oceans toward Faroy, UK, Iceland, Greenland, Canada, USA.

In the East southward, toward the former political center in Copenhagen; the lasting spiritual center in Germany (Martin Luther); the new and old centers of power, Brussels for EU and NATO; Rome for Empire and Vatican and the Treaty of Rome creating EC 1 Jan 1958.

A country divided, united by its long coastline more than the inland valleys, torn in three directions by external attractions.

The paranoia about Russia is an article of faith in Norway East. Less so in Norway West, absent in Norway North. And the more North the more contact and knowledge, the more positive the attitude to Russia.

Russia as the favored enemy, to fear, was and is a part. Why?

Old habits from the 395 split of the Roman Empire in Catholic West and Orthodox East, confirmed by the 1054 Schism, reinforced by West adopting Latin and Latin script, the East Greek and Greek script; later as Cyrillic in Serbia, Bulgaria, Russia. Three crimes rolled into one: the wrong Christianity, the wrong scripts, and too far East.  Three reasons to accept the German mistreatment of the Greek debt.

And the giant attacks by two psychopaths in the clinical sense of narcissism + paranoia from West: French Napoleon, and German Hitler.

Napoleon invaded 1812 with 600,000; 60,000 came back to France, pursued by the Russian army. A total defeat of the “military genius”, metro station famous in Paris for battles won, for war lost in London. Russia occupied Paris a short period, and returned to wounded Russia.

Hitler invaded in 1941 to colonize Russia, 2/3 of Hitler’s army, on the Eastern front. A total defeat by the Red Army; Russia lost 27 million Russian lives.  There was occupation of sectors of Berlin and Wien. And Soviet control of Eastern European allies of Nazi Germany. And of Poland through which most of the invasion had come.

Today the Russian army could have invaded and conquered Ukraine and the Baltic states easily, and did nothing of the kind. Russia supported Orthodox Russians in the 16% Donetsk-Luhansk part of Ukraine with 61% of the economy like Poland would have done had Catholic Ukrainians been killed by Russians in the West. In fact, the whole fighting in Ukraine has been in the East, supported by USA and less and less by Europe, with the clear goal of driving Russians out of Ukraine into Russia; aka ethnic cleansing.  With no protest from West.

In fact Russia is a huge part of Europe from the Atlantic to the Pacific.  The same individualism, a traditional hallmark of Europe, perhaps more so, with even more pronounced individual personalities.  A reason that collectivist economic planning did not succeed in the USSR. It might have succeeded in very collectivist Japan, something the USA feared on top of its fear of Japan, the competitor.

In fact, Russian culture is as much an indispensable part of total European culture; Dostoevsky-Tolstoy-Chekhov-Tchaikovsky as indispensable as Flaubert-Goethe-Shakespeare-Beethoven.  A question is, of course, whether those Russian cultures, or any culture for that matter, have reached those who are planning a super-synchronized devastating attack on all launching sites to defang Russia, knowing very well that the country is too big to occupy. Objection: Russia has plans for warfare in Eastern Europe.  Correct: after Napoleon-Hitler not so strange that they prefer battlefields outside their own lands.

The way out is for the West, including Norway, to read its own history. No Russian eyes are needed, maybe some good spectacles. Knowing Russia helps; travel, not like young CIA trainees using the trans-Siberian railway to spy and write essays. Yes, Russia is behind in many regards, to a large extent because they have been plundered by their own and by the West. The West hates Putin for stopping that.

Putin uses Russia’s huge resources under the slogan “never export raw materials, process them, pocket value-added”.  The Manchester doctrine that made West rich; but with fewer resources, they stole them.  Colonization, in other words; today as “development assistance”.

Time to open the positive door to Russia with exchange for mutual and equal benefit.  Trade in processed goods, and in services, cooperation in killing speculation and drug-poisoning. Above all, mutual respect not only benefit. Admiration, sympathy. Love.